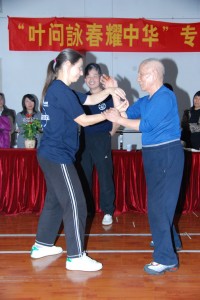 What is Wing Chun?

Ip Man Wing Chun Kung Fu is one of the most practical styles of Chinese Martial arts to exist. It is an ingenious system that teaches you how to overcome a bigger, stronger opponent using skill, technique and sensitivity. Its principles are based on directness and simplicity and it teaches you how to use your opponent’s strength against himself. Ip Man Wing Chun Kung Fu is said to have been created over 400 years ago by a nun from the Shaolin Temple named, Ng Mui. Her first student was a young girl named, Yim Wing Chun and it is after her that the style takes it name. The story goes that a local bandit was forcing himself on Yim Wing Chun. Seeing what was going on, Ng Mui took pity on the young girl and decided to teach her Kung Fu. After training very hard, Yim Wing Chun challenged the bandit to a fight which she convincingly won.

People take up martial arts for many reasons. Some to improve their health & fitness, some to learn how to defend themselves, some for increased sense of confidence and others simply for a pastime to immerse themselves in. The Ip Man Wing Chun class with its high level of teaching and the friendly relaxed atmosphere caters for all these differing needs.

Wing Chun Kung Fu is well suited for ladies as it does not require any specific level of strength. The art is low contact and there is no need to do physical training like punching bags or doing push ups. Practicing Wing Chun is very good to improve one’s level of confidence and develop inner strength. It is also a very practical skill to help ladies deal with confrontational situations, whether verbal or physical. Ladies are very welcome to join the classes to find out more about this special skill. 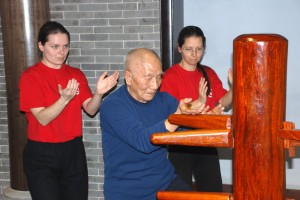 The Wooden Dummy training helps us to bring together all we have learnt in the forms to polish our ‘defence techniques’. It also allows us to practice Wing Chun kicks and train the accuracy of our stepping and body position.

Wing Chun has two weapons: The Six and a Half Point Pole and the Baat Jam Dao (Wing Chun Knives). The more you train these weapons, the stronger your bones will become and so your Qi will develop to a very high level.

Chi Sau is the practical training of the applications found in the forms. Whilst training with a partner you will develop sensitivity, footwork and timing. Soon you will begin to understand how to use an opponent’s energy against himself (or herself). Regular practice develops instinctive reactions allowing you to adapt to change without thinking. For successful self defence this is essential. Chi Sau is like a game and is not meant to be treated as fighting or sparring. It allows you to develop your skill in a safe environment because you can relax and let go.

Not only is Wing Chun a highly effective form of self defence, it is also a very healthy pastime. It strengthens the body internally as well as externally, and it also helps to relax the mind and the body