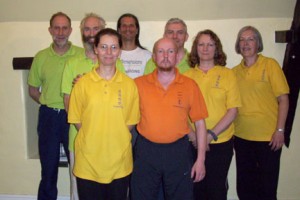 Back in 2002, a work colleague sent Christine Barbier an email asking if anybody was interested in trying out Qigong. This was Martin Hird who was an instructor of the Tse Qigong Centre. He had overheard a conversation between two ladies discussing their health problems and thought that Qigong may help them. So he started a class for the work colleagues. After the while the class moved away from work and others joined.

Experiencing Qigong for the first time

Christine really did not know what Qigong was and wanted to see if it could help her chronic stress symptoms. At the end of the first class she found her mind was very calm. She could also remember the exercises to practice them during that first week. The Qigong skill appeared very different from anything else she had tried before. There was the individual attention during the class from Sifu (teacher) Martin. The exercises that he taught looked simple but felt powerful and made her feel better. Another difference from other type of exercises that she had tried was the “Centre” to which the class was attached. There were Chinese stories surrounding the exercises and the individual exercise names. This was no ordinary class.

At first Christine noticed the effects on her physical body. Calmer mind, less tension, more balanced and happier, and satisfaction to keep a long-term commitment without getting bored. Then later, reading the Qi Magazine and the books published by her Sigong (grand teacher), Grandmaster Michael Tse, she discovered the Chinese culture, values and traditions. It was like travelling to a far away country whilst staying at home. Then one day Sifu Martin said that he was moving away from the area. He then asked Christine if she would like to carry on the Qigong class. After a period of transition, Christine was invited to attend an instructor’s course. At the course she met with more of the Centre’s “family”. Teaching added another dimension to the learning, with students encouraging the process through their questions.

The journey that started with Qigong expanded over the years to include all the other skills offered by the Tse Qigong Centre. Living in the North East of England, it is important to keep warm all year round. Sifu Christine Barbier found that the Chun Yuen Quan skill did just that. It enabled her for the first time to feel comfortable in cold and damp conditions. It also kept her fit and flexible. The skill includes the practice of bare hand forms. It also includes training with weapons of all sorts (wooden staff, broadsword and straight sword), which is good fun. Later she started her self defence and martial art journey. This was under the guidance of her second Sifu, Martin Gale, who is a senior student of Grandmaster Tse. 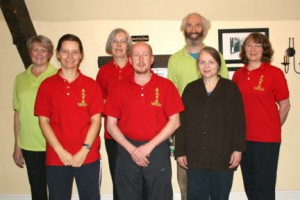 Sifu Christine Barbier learnt both Chen Taijiquan and Wing Chun. There are many martial art classes available in the UK. She always thought that these were only for the though guys and required rather more strength than she naturally has. She was proved wrong in her assumptions, as the self defence that the Centre teaches relies on skill not power. So she found that she could actually use the techniques effectively even thought she is a small person. Practicing Taijiquan and Wing Chun forms develops the strength in the legs and the coordination and reactions in the brain. This can then be used in friendly partner’s games. These are “pushing hand” (Taijiquan’s Tui Shou) and “sticking hand” (Wing Chun’s Chi Sau). One unexpected bonus has been the application of the Taijiquan and Wing Chun principles to non-physical situations. For example, when someone has “a go at you” or “gets on your nerves”, then the situation can be handled much more calmly, helping to find a good outcome and reducing stress levels significantly.

Travelling to China and meeting the Grandmasters

Over the years Sifu Christine Barbier has had the privilege of meeting two of her Tai Sigong (great grand teacher) still alive. Grandmaster Chen Xiao Wang for Taijiquan and Grandmaster Ip Chun for Wing Chun. She has experienced first hand their teachings and skills. She has also travelled to China with the Tse Qigong Centre, the birth place of all these skills. The experience of the culture and philosophy from which the skills originate has been invaluable. She has made many friends with other like minded people in the Centre, some of them living on the other side of the world.

Passing on the skill

Sifu Christine Barbier hopes that she can help others discover, enjoy and benefit from these authentic skills.

On-line classes, every Wednesday (on Zoom) In-person classes, occasional Beginners are welcome to join one or more classes at any time during the year. Classes are suitable for all levels of fitness. No special equipment is required, just comfortable clothing and footwear. Download a class leaflet here. In-person classes located in Hexham area:
Hexham is located 30mins away (by car or train) from Newcastle upon Tyne.
View Map